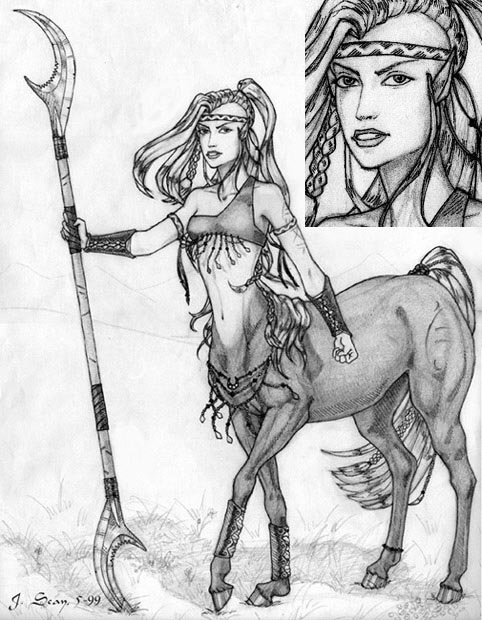 Ranges from 6-8 feet from hooves to head.

Centaurs are creatures with the upper body of a human and the lower body of a horse, and are one of Visola’s most unique races. Centaurs can have any hair and eye colorings humans have, as well as golden eyes. Their hair color often at least partially matches the coloring of their coat, but this is not guaranteed. Many centaurs decorate their bodies with tattoos, and their hair and tails with braids, beads, and feathers.

Example Description of a Centaur 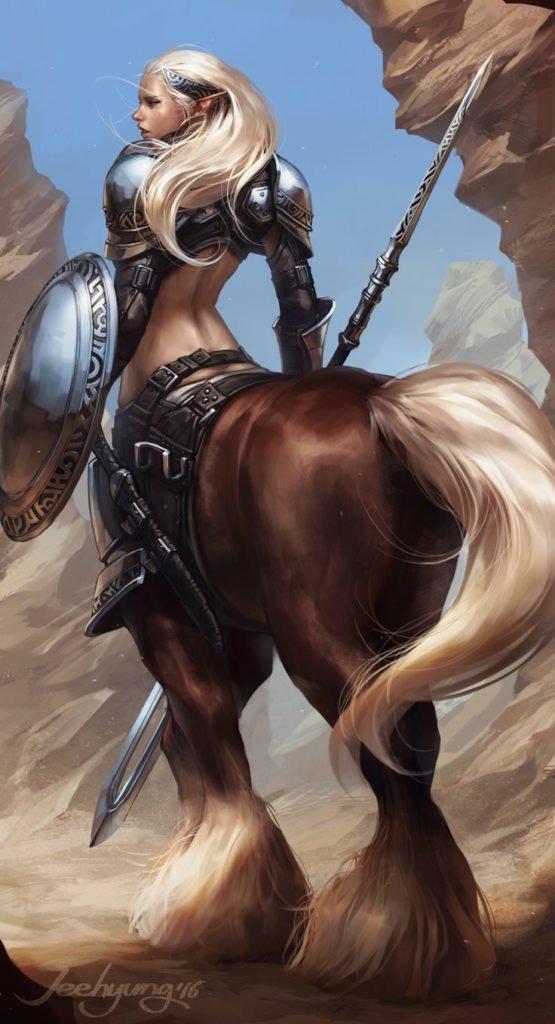 This robust centaurian man stands a regal 7 and a half paces tall, and is an impressive specimen of his race. Almond-shaped, expressive eyes of a deep brown color are deeply underscored by smile-lines despite the thick, straight brows above them and his otherwise strong features: a wide square jaw and hawkish nose, which completely overshadows his narrow lips. His skin is a deep and weathered brown from sun and wind, with a handful of scars marring it. His human half is thick, with wide shoulders and a waist that’s only slightly narrower, with well-trained muscles under a healthy layer of fat. Glossy black hair with a few gray strands has been left free to cascade down his back to brush against his waist.

His horse half is as thickly muscled and barrel-chested as his top, with draft-horse worthy legs and massive hooves. His fur is a deep brown, with appaloosa markings–a bright while splash of white right on his rump with a few speckles sprinkled up his back. His tail has been neatly braided, with brightly threaded strips of cloth binding the braid.

He has three red circles tattood on each of his cheekbones.

Centaurs tend to be a solitary and reserved race, preferring the company of their own tribe to that of other races. They do not distrust or dislike other races; they are simply more comfortable with their own kind. Centaurs are a very noble and honorable people and are well known for keeping their word. They have a tribal culture, governed by the eldest centaurs in the community. Centaur children are raised to respect their elders, and aged centaurs are revered for their wisdom.

The Centaur people are made up of 4 known tribes, 5 if one was to count the outcasts and independent centaur roaming the lands.

The recognized tribes are as follows:

Wildrunners – A tribe stereotyped by the Centaur people as the wild centaurs, and are rare to be found. They are a nomadic tribe of Centaurs known as great hunters and rangers all over Visola. They are well-versed in all terrains and survival situations, with little loyalty to anything but their own Tribe. Their symbol is the rearing white stallion of Varick.

Blackrock – The Blackrock Tribe are the protectors of the Maitland Valley. They are hunters, gatherers, and traders that roam all of the northeast of the Blackrock River. They make sure that the sanctity of the Maitland stays in tact, gather goods for trade usually within Thelasia, and are known to raise the best horses in all of Visola.

Stormborn – The Stormborn Tribe are another set of nomadic Centaurs known for their brute strength and religious devotion. They are the remaining remnants of the Silver Tribunal that was destroyed during the “Great Storm” of the Centaur people. They are the most religious of all Centaur, and are Crusaders of Order and Justice. Though many fear that they will resort to the ancient ways of the Tribunal. Their symbol is the silver lightning of the Wrath of Caelestis.

Earthtenders – The Earthtenders are the only stationary Tribe of the Centaur people. They are the farmers of Maitland Village, and keep the Convenant of Varick alive and protected among all of the Centaur tribes. They are the most orderly tribe, and are often the diplomats and traders with all other races. Their symbol is a sheath of wheat to represent the golden hills of the Maitland.

Tribeless – All Centaurs not in the above tribes are often called tribeless centaurs. All are still accepted in the Centaur culture as a whole, and any lawbreakers are considered “impure” centaurs.

Note: All PC Centaur’s are considered tribeless centaurs unless approved by the staff otherwise (See HELP CHARACTER RESTRICTIONS) or through roleplay with one of the Centaur leaders.

Centaurs are tremendously strong second only to orcs, adeptly using the leverage and power their lower body gives them. They are also hardy people, accustomed to a more rugged lifestyle than most other races. Their large size and equine body lets them carry allies on their backs, and a centaur leading a trained rider can be a fearsome tactic. However, this large size also gives centaurs some trouble maneuvering in combat compared to smaller creatures. Mentally, centaurs are on par with humans, but the centaur culture as a whole has little use for magic, and as such, it is rare to see a skilled centaur mage and they are sometimes vulnerable to certain manipulative magic. As they have not been exposed to the diseases in civil culture, they tend to be more prone to them when infected. Their time spent in the valley has given them the ability to see without the support of light.

Tips on playing a Centaur:

According to legend, the origin of the centaurs dates back to a herd of wild horses that roamed Maitland Valley. They were a strong and noble breed and protected the valley and the creatures that inhabited it from outsiders. Varick took notice of the herd and was impressed. He granted the horses sentience so that such magnificent creatures could grow beyond the limits of animals. With this act, the first centaurs were born. They continued to protect Maitland Valley and created a temple to pay homage to their creator.

Centuries before the Age of Strife, a particular group of zealous centaurs formed a religious sect known as the Silver Hand. In Varick’s name, these followers crusaded against all forms of disorder and crime. Magic was dubbed witchcraft by the centaurs of the Silver Hand, and mages were persecuted for increasingly trivial offenses as time went on. Eventually, these centaurs became murderers of justice rather than peacekeeper’s as their overzealous fervor misguided them. Varick was angered by the perversion of justice and appeared before the centaurs in the center of Maitland Valley. What transpired that day is told in many centaur legends, each recounting different events. In the end, the Silver Hand ceased to be. That day is remembered as one of the darkest in centaur history.

Human – They’re okay…from the waist up. Though they seem to get mixed up in their greed for power that they lose a lot of respect.

Orcs – I used to think they were savages, but having run into a few in my time, I’ve grown to respect them. They are easily misunderstood.

Aeromis – They have little respect for order, and only seem good for stirring up trouble.

Pixies – More of an annoyance than anything, I pay them little mind. They don’t serve any real purpose.

Elves – I doubt any you’ll ever meet knows the true meaning of earning their keep. The few that I’ve had the unfortunate pleasure of meeting seemed incredibly stuck up.

Brownies – Menacing but should be respected for their knowledge of the woods where we are at the most disadvantaged.

Felar – They do not know the meaning of honor and should be watched carefully.

Hydrel – I’ve never actually met one and have heard very little rumors. I’d be curious to learn more about their ways, they seem like peaceful creatures.

Gnomes – They seem simple-minded, but have pretty complex ideas about the world in general. There is much you can learn from them if you can decipher all the nonsense.

Dwarves – They are hard workers and strong in their beliefs. They are good allies and lifelong friends.

Giants – I don’t understand much about these sorcerers, I just tend to keep my distance.

(This is the general concept of the race. Advent allows for diversity and originality when it comes to racial concepts and background, as long as it is within reason Physical references to races should remain within the norm. Feel free to use your creativity should you choose to do so.)