Advent of the Mists > World > Organizations

Several different organizations have been brought together over the years throughout Visola. Many never seem to develop fully, but there are several that have gained in strength and numbers to be considered an international organization. Players can seek out the leaders of these organizations about joining and perhaps earning a decent salary.

The Imperial Legion is the main governing force on the continent of Eadoin. Its headquarters is based in Attania, in the center of Eadoin, and they enforce the laws of humanity. There are many opposing forces to the methods in which the Imperium chooses to enforce its laws.

The Brotherhood of Latronis is the most prominent trade organization in Visola, and its influence reaches amazingly far. Made up of mostly merchants and traders, the Brotherhood’s most significant presence is in Thelasia, where it has done wonders for the harbor city’s economy. 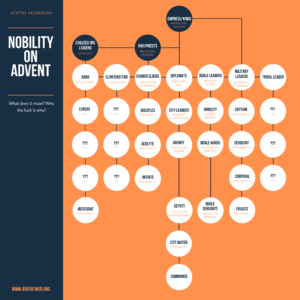 Occasionally we get requests or questions about whether players can start organizations in-game. The answer is a resounding YES.

Some tips on potentially starting an organization:

Can Organizations change based on roleplay? The answer to this is also a resounding YES. We want the players to direct the development of the world. If someone is capable of bringing down the Imperium, then we will support that. If someone is interested in taking over an organization, they just need to put in the work to make that happen.

How do I join an Organization?

The best way to join an organization is to seek out known members of that organization and build contacts in-game. You can also do this by sending a note (HELP NOTE) to the organization name, letting them know of your interest.

While you wait for a potential response, learn what you can about the organization, who is in it, if they have a notable history, and watch them in action when you can. Learn their mannerisms and how they deal with conflict and other people in the game.

There is currently no automated way to join or even express interest in joining an organization. We may be developing a way for recruitment.

What do I get out of joining an Organization?