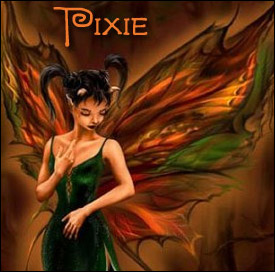 Orenda, The Divine Sorceress, Lady of the Mists

Pixies are a tiny race, average only about 6-10 knuckles tall with a wingspan of the same length. Their wings, almost always iridescent, are covered in magical pixie dust. The color of their hair and eyes are usually exotic, from a buttermilk blonde to a fiery orange to even the deepest of blues. The variety of colors in their hair and eyes gives them an uncanny look from all other races. Their wings are shaped much like a butterfly with a mix of colors and patterns, soft to the touch, and easy to damage.

Example Description of a Pixie

Female Pixie:
Standing at six knuckles in height is this female pixie. Her long curly cerulean hair holds an obvious frizz. Due to frizz, it gives the appearance that she hasn’t maintained her hair in some time. Her heart-shaped face has a small nose and lips and a pair of large golden-colored eyes, giving her a youthful appearance. A small layer of freckles dot across her nose. Her skin is slightly tanned wrapping around her lithe form. Wings in the shape of butterflies protrude out from her back spanning wide for flight. They appear to be translucent with a soft shimmering hue of blue.

Male Pixie:
This male pixie stands at ten knuckles in height. His fiery red hair spikes in every direction imaginable as if by magic. He has an angular face with a straight nose and thin lips. Bright orange eyes peer outward with almost an innocence to them. His skin is tanned wrapping around his fit and agile figure. There appears to be a scar on his left cheek and dirt under his nails. His large translucent wings protrude out of his back shaped much like a dragonfly’s. A shimmering orange hue encases his wings, deepening and lightening depending on the light.

Pixies are a fairly innocent race. They find solace in surrounding themselves in beauty, fun, and games. They are consistently underestimated by virtually ever race in Visola, who tend to dismiss them as nothing more than playful children. However, this couldn’t be further from the truth.

Pixies are curious by nature, always getting into peoples belongings and distracted by things that seem interesting to them. But behind their friendly and intrusive disposition, they are powerful magicians and sorcerers. They have the ability to tap into the mists in a way that no other mortal can fathom. Because of this, some folks considered pixies to be cursed and will bring chaos in their wake.

Traditionally pixies take the name of their home environment, with last names such as Glimmerwing, Greenleaf, or Oakfoot. They hold family and friends to high regard, defending both to the death if needs be. Pixies have no real government but are said to live in tiny hidden villages in the trees, and no one knows for sure how pixie justice is served.

Disclaimer: Pixies do not act like like children. Do not talk with a 5 year old vocabulary, or anything relatively similar.

While not strong or durable in any way and often hurt by weapons easier than most, pixie strength lies elsewhere. They are abnormally quick, have the ability to fly, and resistant to all types of magic as well as detecting magic.

Tips for Playing a Pixie:

Orenda wanted a race with unimaginable beauty that was not corrupted by the need for power or strength. Children born of the mists themselves, Orenda cultivated them from an ancient power, hidden by their size and form. They’ve never been involved in any heavy war, they hold no political stance, yet some believe they hold more power over the Jyhad of Visola than anyone knows.

Human – Humans amuse me just for the fact that they consider us completely harmless. They are blinded by their size and power, they know nothing else.

Orcs – I can’t say much for the orcs, they keep to themselves mainly. The ones I’ve spied on from afar I think would make me nothing more than a snack.

Hydrelean – The hydrel I’ve happened across were very curious about our wings, and very considerate. How anyone could find them harmful is beyond me. They’re just different.

Aeromis – We share the skies with the Aeromi, though we don’t dare venture as far into the clouds as they do. They are strong-willed and independent, and I admire that.

Brownies – They act as our protectors, and for that, I am truly grateful. Little do they know it is we, who protect them.

Elves – I sometimes think they have a deep-seeded jealousy for our kind, though I haven’t quite figured out what. They are cold, arrogant, and barely tolerate us.

Centaurs – Though noble, the centaurs have little patience for our kind.

Gnomes – I do enjoy a good conversation with the Gnomish people. Their gadgets are always entertaining!

Felar – The only Felarae I ran across attempted to sell me, stay away from them.

Dwarves – Dwarves are only interested in their work. Though I will admit to stealing a stone or two.

Giants – Perhaps the only race that really understands the Mists and how they really work. I think we can relate to them more than the others, but I don’t think they trust us much.

(This is the general concept of the race. Advent allows for diversity and originality when it comes to racial concepts and background, as long as it is within reason. Physical references to races should remain within the norm. Feel free to use your creativity should you choose to do so.)