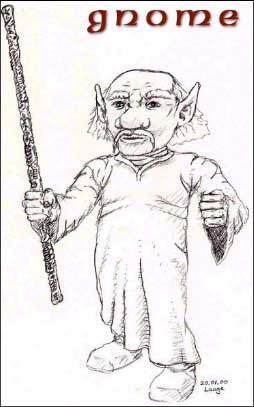 Isorian, Guardian of Knowledge and Time, Keeper of the Underworld

Like their Dwarven cousins, Gnomes are short and stocky in build. Skin tone and hair color don’t stray out of the human norm, though they lack any sort of facial hair. Their features are pudgy and undersized, even for Gnomes that are physically fit and able. Gnomes tend to dress in humble clothing, as they care little for fashion. Their eyesight is weak, often relying on glasses, be it for reading or to see at all in the worst instances. Their skin, soft and pale, burns easily when exposed to the sun, while their hair fades at a young age among men, and usually balding near adulthood.

Example Description of a Gnome

Sedate and scholarly, Gnomes are peaceful people only aroused by pride and competition in their fields of knowledge and lore. Knowledge is the basis of status among the Gnomish people, which often comes with age. From birth, a Gnomish child spends the majority of its time absorbing information. Tinkering with toys, reading philosophical scrolls, and developing artwork.

Gnomes aren’t a very independent race since the fall of their ancient keep during the Age of Strife. They’ve survived on melding with societies in other cities, taking up professions of all sorts with their endless supply of knowledge. They are not a very outspoken race, instead engrossing themselves in their duties by whoever employs them. They can be somewhat shy and apprehensive, which makes them easy to manipulate.

Gnomes are known for their peerless intelligence. They make admirable mages and sorcerers, and are slightly more agile than their cousins, the Dwarves. They are not very strong or hearty, but they more than make up for that with their natural acumen. Due to their intelligence, they are resistant to attacks of the mind.

Tips for Playing a Gnome:

The Gnomish race has survived many disasters since its creation. What was once a healthy and thriving race was dwindled down to clumps of stragglers in a matter of decades. Their elaborate keep of knowledge destroyed by war, mostly at the hand of the orcish hordes. Their relationship between their cousins, the Dwarves, ripped apart by the feud between their creators Gannor and Isorian. They were left scattered to the wind, a good portion finding themselves camped outside the gates of the rebuilding Attania, becoming known as the City Gnomes, while the rest remained throughout the Aolani Mountains, Beruvian Mountains, and Mistwood, becoming what is known as County Gnomes. Their knowledge of architecture proved to be the secure foundation of the new Imperium city. Since then they have endured through their wits, becoming tacticians, architects, scholars, all employed by the highest bidder.

Brownies – I think they could prove to be great inventors if they could focus their mind to it. Instead, all they seem to want to do is play.

Orcs – They are nothing more than savages!

Hydrelean – I think the Hydrel understand things about sailing and the ocean that we could never understand from the land. There’s so much we could learn from their people.

Aeromis – If they learned the act of conformity better, I think they could do well for themselves. Still, they’ve been places and seen things that I only wish I was able to do myself. They could teach us plenty about other places in the world.

Pixies – Sometimes the only thing that brings me joy, is conversing with a pixie. They continuously surprise me with what they know.

Elves – They have the resources to become a great people, but they put their social status above everything else, which means they will never reach their full potential.

Centaurs – They are simple-minded but pure of heart. A good companion to have when traveling, as they will save your feet.

Felar – I’ve never had a good experience with a Felarae. They see us as nothing more than pawns.

Dwarves – Speak not of the Dwarven race, nothing good can come of associating with their kind.

Giants – I know little of these prophets, though I’ve always been eager to study them. It’s a shame their choice of habitats was so poor.

Humans – Though I’m often marveled at the depth of their greed, we owe them a great deal for helping us to get back on our feet again. For that I am truly grateful.

(This is the general concept of the race. Advent allows for diversity and originality when it comes to racial concepts and backgrounds, as long as it is within reason, so feel free to use your creativity when playing the race. Physical references to races, however, should remain within the norm.)