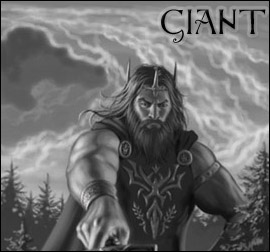 Romjin in the Beruvian Mountains

Giants are the tallest sentient race across Visola. Their bodies are almost disproportionally broad, and are well-muscled and toned even from birth. Skin tones range from beige, black, brown, copper, and slate gray, like the color of stone, with eye colors composing of the same colors.

Giants dress is common clothing, preferring simple and practical dressings they create from their own territory. They are accustomed to cold climates, generally garbed in thick warm furs and robe fabric to keep warm on their mountainous terrain and cave dwellings. Both male and female alike are often adorned with magical charms and wooden staves. But beyond their size and a slight variant in skin color, there is little distinction from humans.

Example Description of a Giant:

Perhaps the most peaceful race in the entirety of Visola, Giants are well-known for their temperance and extreme intelligence. Still, beyond their kind demeanor, some still judge them as nothing more than witches and sorcerers due to their wild prophecies.

Giant culture is very simple and harmonious. They have simple religious rituals they perform daily, and everything has a time and a place. Their elders are the most revered among Giant society, and children are the most prized. They are enormously patient and extremely slow to anger. Things that would mortally offend a man or elf would not begin to scratch the surface of a giant’s patience.

The Giant race is strong and tough, but they are renowned for their blatant lack of finesse. They’re smarter/wiser than humans, and their magical ability is slightly below average, though they can still make more than capable mages. Giants have an affinity for telepathy, sometimes hearing the thoughts of those around them. Due to their ability to touch others mentally, they are also vulnerable to mental attacks. Since Giants grew up in the mountains, but do no naturally possess the power of flight, they are also vulnerable to aeromancy magics but maintain the ability to withstand cold.

Tips for Playing a Giant:

Giant lore states that Faledric carved the race from the mountains themselves. His vision was of a race of unsurpassed wisdom beyond normal intelligence. Seers, prophets, those with the ability to understand the mortal psyche to understand how the world works from the eyes of a God. With open minds and telepathic abilities, Faledric instilled what he believed to be greatness in the giants.

Very few stories surround the history of giants, as they tend to stay out of mortal politics and wars. Since history is mostly written about great feats and deeds, the giants stay under the radar of the mortal populace.

Human – I’ve always given them the benefit of the doubt. But even their greediness can try my patience.

Brownies – They are entertaining and joyful company to have around, though they don’t trek up to the mountains much.

Hydrelean – When the snows melt I often visit the Cienega swamps and the hydrel that live down there. They have always treated me with respect and are honest traders.

Aeromis – Somewhat high-strung in their beliefs, but they are good mountain-dwelling people.

Pixies – I’ve yet to know a pixie that I could see.

Elves – Intelligent, there’s no doubt about that, but full of arrogance.

Centaurs – They have good hearts, and are sound in mind and body.

Felar – Occasionally we catch a Felarae up in the mountains from the desert below, but they do not venture up here much. When they do, I imagine its solely to steal. I suppose if they need things so badly, they are better off with it.

Dwarves – They are our brethren of the mountain and our most solid ally.

Gnomes – I do not understand the quarrel between our Dwarf brethren and these gnomes. Because of it, I know little about them, which makes me curious.

Orc – Another brother of the mountain, I believe they are easily misunderstood. They are always welcome in my home.

The Mystics from the Dark Crystal

(This is the general concept of the race. Advent allows for diversity and originality when it comes to racial concepts and background, as long as it is within reason. Physical references to races should remain within the norm. Feel free to use your creativity should you choose to do so.)

By the way, good MUD. ? If I won the lottery I would honestly spend the money on paying a group like y’all to make a MUD for me. 😉