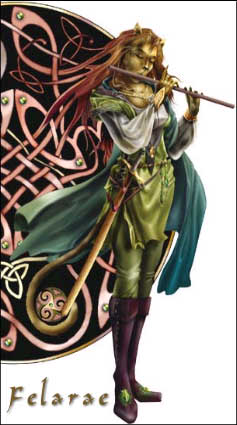 The felar are a race of cat-like humanoids native to desert and jungle regions, most notably the Hajarnan Desert, also known as “The Hajar“. Their bodies are generally human, they walk upright on two legs, and their arms, legs, hands, and feet are all like those of a human. They are entirely covered in very short fur, however, and they have tails and claws. The fur covering their bodies is short enough that the lines of their muscles can be seen beneath it (like the coat of a horse), and comes in a wide variety of colors and patterns. The Jungle Felar generally have more brightly colored furs such as orange, violet/lavender, a pale grayish blue. The Desert Felar have darker fur such as browns and black. There are very few white/albino felar, but they do exist and are often ostracized by both the Jungle and Desert Felar.

Many felar are born with traits similar to feline breeds throughout the land. Some inherit stripes like a tiger, others spots like a jaguar and leopard. Some are solid in color with a beautiful silky mane like that of a lion. Their general demeanor though is still human.

Felar tails are light and agile and tend to be very animated. Desert felar, the most common type, are generally smaller than humans and nearly always have lean, firm bodies. A fat felar has devoted serious time and effort to the cause, though they do exist. Jungle felar tend to be larger and more muscular than their desert relatives and match humans in size.

A felarae’s face is strikingly feline, and is the easiest way to tell a clothed felarae apart from a human. The overall shape of their face and jaw are human, but their nose and mouth are feline, along with whiskers and pronounced fangs. Their feline ears are near the top of their head, usually poking through their hair. The hair itself is usually just like a human’s, though more exotic (and more feline) hairstyles do exist, and a felarae’s hair color is usually not too far off from the color of its fur. Their eyes are distinctly feline, with vertical pupils and exotic colors, and can be large and wide or small and narrow depending on the felarae.

Example Description of a Felarae:

Female Felarae:
At four and a half paces in height, is this female felarae. She has sleek tanned colored fur that wraps around her lithe frame. Just above her elbows, there are two black sharp stripe patterns. Her face is small and round, with bright amber-colored eyes. At the edges of her cat-like eyes, is a darker streak of tanned fur where it’s uncertain if it’s natural or just dirt. Her cat-like nose appears to be pink in the middle with darker edges. Along her muzzle shaped mouth, whiskers protrude out that are white. Her ears are tapered with white tuff on the inside, protecting the depths from the elements. Her hair falls to her shoulders, with small colorful beads in here and there tied through her hair. Her long nimble fingers have small claws that appear to be well kept in her grooming habits.

The majority of felar come from Amadahi, and are renowned throughout Visola as being the most morally lax people throughout the lands. For these felar, personal gain is their primary motivation, and deceit and murder are acceptable, if regrettable, means to that end. The other races of Visola have learned that it is often best to consider why a felar tells you something, rather than take his words at face value. The more honest of these felar tend to be merchants and traders, and are usually shrewd hagglers.

Other felar have a much more human morality, which is still not to say they are the noblest people, but it does lead them to fit in well with human communities. However, no one can tell a moral felar from an immoral one just from a glance, and so the general distrust of the race remains.

Felar are also known as gypsies and entertainers, with an avid fascination for revelry and merrymaking. Amadahi is often filled with all night vigils of celebration and promiscuity. Males tend to dominate Felar society, some even take numerous wives as their own. And though the females must work twice as hard to gain any sort of status in Felarae culture, those that do are well respected.

Disclaimer: Felar are selfish, not cruel or evil. Playing a felar is not an excuse to kill or steal randomly, or murder someone for weak reasons.

A felarae’s greatest strength is its exceptional natural agility. Their lean muscles also make them just as strong as humans, despite being generally smaller. These two traits make felar potent fighters offensively, often able to take down an opponent in melee faster than any other race. They aren’t as durable as the average fighter, however, and their skill with magic is below average at best, so they tend to rely on their speed to keep them alive. Because the felar are jungle and desert creatures, they are resistant to most heat and, as felar, vulnerable to water. Their keen eyesight allows them to see in the dark, and their light-footedness lets them roam around quietly.

Tips for playing at Felarae:

There is much debate as to how the first felarae came to be. Most felarae themselves believe their people were created to be the only race strong enough to thrive in Visola’s harshest environments. They believe their culture developed as a result of the rigors of such deadly homelands, where every felar had to think of survival before worrying about minor things such as morality. Another popular story is that a breed of wild cats made a pact with Murelu to become his servants in exchange for power and that their children then became the first felarae. Many centaurs believe Murelu created the felarae for the sole purpose of subtly mocking Varick, a near perfect antithesis to what the god of honor desires. Other theories are that the felarae were born from the shadows themselves, or that Murelu simply made them for fun, while drunk, or that the first felar were the children of Murelu and a beautiful human woman. The true story may never be known, but nearly all stories agree that Murelu had a hand in their creation.

Racial stereotypes are what each race, in general, feels about other races. There are always exceptions to these rules, but in Felar society, these mindsets are typical.

Human – Never trust a human, except to do your dirty work.

Aeromis – They seem to have issues with our way of life, but one mention of oppression and you can manipulate them to do anything.

Pixies – I only tolerate them, because they are perhaps the only creature that is a better thief than I.

Elves – I can appreciate their beauty, but their attitude stinks.

Centaurs – They are always causing trouble for our people, looking down on us from their high……horses, like we are nothing but criminals.

Orc – Often dumb enough to sneak anything past, but do not let them catch you *wince*.

Dwarves – They aren’t quick enough to be of any real threat. I don’t know how they see anything past their own stubbornness.

Gnomes – Coddle them, and they will prove quite useful.

Giants – I can’t say much for the giants I have met. They make me uneasy with their visions of what is to come.

(This is the general concept of the race. Advent allows for diversity and originality when it comes to racial concepts and backgrounds, as long as it is within reason, so feel free to use your creativity when playing the race. Physical references to races, however, should remain within the norm. Felarae image created by: Stephanie Pui-Mun Law)