Advent of the Mists > World > Religions & Gods > Anari, Goddess of Storms, Lady of Love and the High Seas 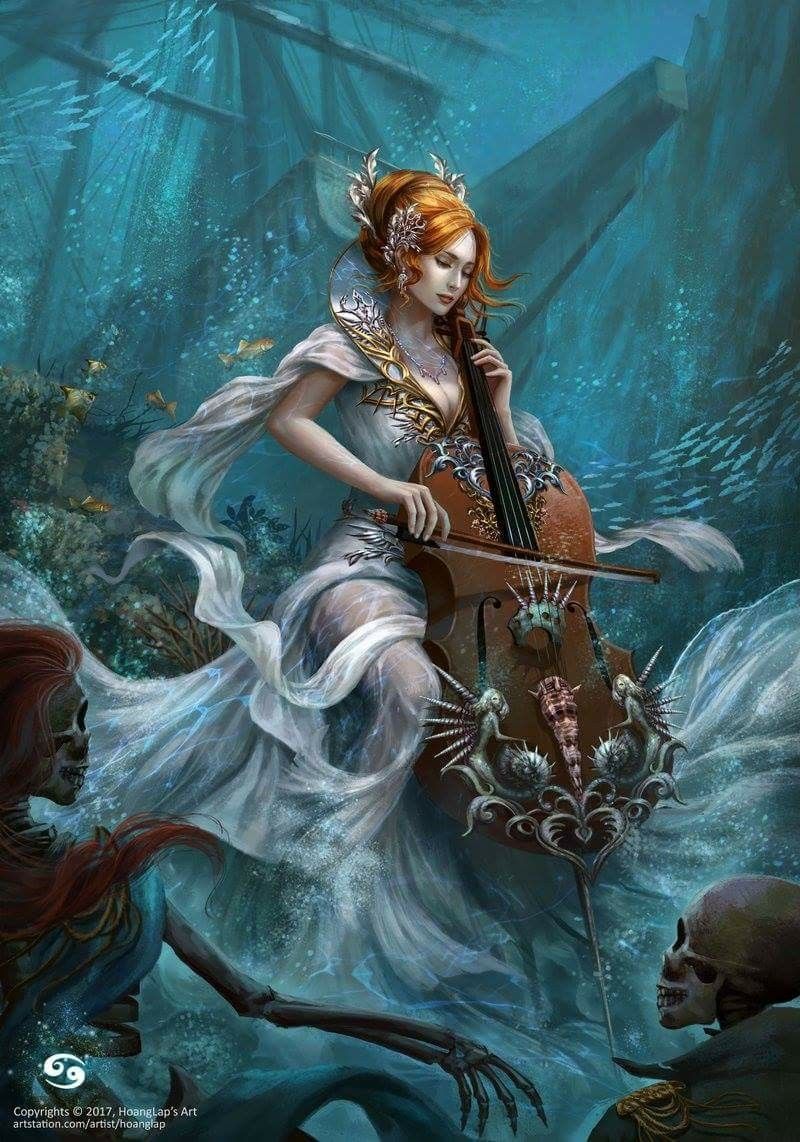 From the highest Imperium Admiral to the simplest fisherman, any who hope to brave the vast expanses of water that border the coastline of the Visolan mainland successfully will most usually pay homage to the unpredictable Queen of the Seas, Anari. As fickle as the weather that can both favor and murder crews of the greatest vessels, it is well known that she presides jealously over her liquid environs, driving off any who would anger her with the greatest of torrents and favoring those who have earned her admiration with good winds and clear skies. Anari, sometimes referred to as the Siren, is also worshipped as the deity of love, relishing her abilities to incite fiery passions into mortals. Spread evenly on the spectrum between purest love and carnal desire, the immortal temptress is paid homage when blessings are sought for nuptials, birthings, and even adulterous affairs. It is also well known that she is the patron deity of the hydrelean people and keeps a constant watch over them.

After Crystal sanctified the soil that she gave to the nascent world, Anari was the fourth born from the mists that sprung from Olu and sprinkled her gift of water to fill the spaces between the land masses. During the period of creation, Anari noted that all the other Gods gave their ‘experiments’ bodies that would live best on Crystal’s land and offended as she was, Anari coveted her secret race until she was proud of it and bestowed her creations unto the oceans she so loved. Called the Hydrel, she molded them to suit the watery depths of Visola, even though she knew this would separate them from the main host of other intelligent races. Yet she was sympathetic and was one of the only immortals to give a gift to the world after the period of creation when she instilled love and lust into the hearts of the fledgling peoples of Visola. Although some of the other Gods questioned this action, with time this intense emotion came to suit their purposes in one way or another and so it was accepted. The conflict that proceeded throughout history on land was generally of little concern to Anari, however, only when great ships began to take seaward to continue the conflict did she begin to take an interest. Dependent upon her mood she would sometimes toy with mortal sea warfare as if it were a game almost as interesting as love. Sometimes she would leave her watery refuges to wreak havoc in the other Gods’ affairs by causing two of the most unlikely individuals to fall in love and was often blamed for unorthodox passion.

Passionate and emotional, Anari’s personality is reflected in the churning of her seas. It has been said she is the original stereotype of the strong woman; bold and unyielding but nonetheless distinctly feminine. As the Siren, the Lady of love and lust is charming and seductive to those who she pursues and jealous and vengeful to those who cross her path. When placated, her satisfaction will often bring calm waters and when angered, storms brew and choppy sailing ensues. Visolan folklore has it that a red sky at night indicates desire brews in Anari’s heart whereas a crimson sky in the morning heralds her wrath and anger.

Not unlike most of the pantheon, Anari prefers to keep to herself, observing the mortal world from her watery throne. Having said that, she enjoys immensely her dabbling in visolan affairs and will use the ocean to express her feelings and her limitless powers of love to incite drama between mortals. Between sailors, rumors abound of Siren sightings and many a seaman will claim to have heard her haunting song, brought to them over the water at dusk. Anari is often not satisfied, though, in playing the matchmaker and will occasionally take a mortal form to satisfy her own desires and toy with the heartstrings of any unsuspecting male who she might deem of interest.

The Empress of the Oceans often tires of the games her fellow Gods play with one another, but she keeps tabs on the other eleven of her brethren out of interest nonetheless. Although speculation has it that she has lent her heart to one or more of the male immortals at one point in time, there is little to reaffirm this as, knowing all too well what love can do to the unwary, Anari prefers to keep her personal affections well hidden. It was Siramus’ love for her that brought about his punishment during the great downfall of Cedric and both he and Cedric vie constantly for her attention partly due to her legendary beauty and partly due to their deep-seated rivalry.

It is believed the Murelu and Anari have an appreciation for each other, though it is not expected to be romantic. Murelu’s interest in revelry and joy and Anari’s influence over love and lust lend well to both Immortals sharing some similar interests.

The Hydrelean of the Kior’aan Islands. The City of Thelasia and Sailors who roam the seas.