Advent of the Mists > World > Calendar > Sun and Moon 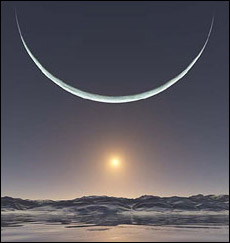 Advent’s solar atmosphere consists of one Moon and one Sun. They are often just referred to as the “Moon” and the “Sun”, but their history and detail have been expanded upon over the ages.

The Sun is strongly associated with Varick, whose sigil is the Sun in full bloom. Often times mortals will even consider the Sunrise to be the awakening of Varick himself. But the Sun also consists of three stages throughout the wheel of the year.

Stage One starts during the month of the Wild Hunt, influenced by Varick and considered the Sun of Rebirth. During this time the Sun is still very new and often more white in color. It showers Visola with rays of fresh light, awakening Visola from its slumber.

Stage Two starts during the Month of Shadows, influenced by Murelu and considered the Sun of Life. During this time the Sun reaches its highest peak in the sky, filled with bright yellow and enveloping the world in golden heat.

The final stage starts during the Month of the Hammer and is associated with Cedric as the Sun of Death. During this time the Sun reaches bright orange and red hues as it descends further beyond the horizon, creating a palette of colors in the sky.

The Moon is embodied by the Goddess Crystal and her influence on the waxing and waning of its three stages.

Stage One starts during the Month of the Wild Hunt and is influenced by Crystal as the Moon of Rebirth. During this time the life under the canopy of Visola springs forth, while the crescent of the waxing moon fills the sky.

Stage Two starts during the Month of Shadows and is influenced by Orenda as the waning Moon of Life. It is a time when the Moon is exposed in its full splendor, creating light that emanates in the darkness of Visola.

Stage Three starts during the Month of the Hammer and is influenced by Isorian as the Moon of Death. The waning portion of the Moon is often dark in colors of gray or orange, sometimes even called the “Blood Moon”.

The Sun and Moon work in parallel with each other in balance with the Mists. As all things have an equal opposite to their existence. They are often referred to as “Stages” or “Cycles” (“The Sun is in its Cycle of Death”).